In February 2010, the blogspot referrred to throughout this site was posted on to the internet by Marcus Heckman, a cleric within the discredited Reformed Catholic Church (hereinafter referred to as the RCC), and done so with the blessing of George Phillip Zimmerman and here in Ireland, Niall Sheridan (pictured here).

Their intent and purpose was to defame and discredit me as much as possible so as to cause the greatest inconvenience to me and my ministry whilst also causing offence to so many others.

The reason behind such was that in November 2009, I alongside others had become aware of the fact that the hierarchy of the RCC were permitting a 3 times convicted paedophile, namely Seán Michael Lyons to work within their ranks, and indeed plans had been made to trasfer this felon to Ireland where Niall Sheridan was to have accomodation and employment available for Lyons.

This information had been withheld from clergy in Ireland by Niall Sheridan, then "Archbishop for All Ireland, Scotland, Wales and England, and Father Protector of European Communities" and only came to light post RCC Synod.

I informed other clergy of this serious issue, and a debate began which Sheridan attempted to silence and even refused to permit the clergy to discuss amongst themselves (emails dated 28th October 2009 and 17th November 2009 from Sheridan) this most serious of matters.

A 3 hour meeting was held towards the end of November 2009 with Sheridan, Heckman and Zimmerman abstaining in the voting process to formally laicise Lyons, but nonetheless the motion was still carried.

My crime was that I raised the issue (as indeed so many others were) and was discussing it (as is only right and proper) but I also reported the matter to officers of the court in Ireland and also notified my solicitor.

Such a requirement is laid down in Irish law and therefore as an Irish citizen, I was (and remain) subject both legally and morally to report such an attempt to transfer a 3 times convicted paedophile from one jurisdiction to another.

Within the RCC, there was great angst about what had happened and this was directed moreso at their hierarchy for their deceit and many of its members were leaving in droves as they no longer wished to be party to such cover up and accommodating of convicted paedophiles.

Retaliation was in the minds of those in the hierarchy and I was in the firing line, and so it came to pass that Heckman et al got to work by using the medium of the internet to defame me.....and thus the malicious rumours and unfounded allegations were posted on the blogspot mentioned on this site.

They also hacked my email account and sent the link to this offensive and malicious site to my over 300 contacts causing them great offence.

My solicitor and I began making contact with those others (i.e. persons, organisations et al) mentioned on the site and got communications from such relative to what was posted and some of those documents are posted on this site to categorically counteract the false assertions made against me.

The responses to each posting are taken from the Affidavit compiled by my solicitor and I based upon truth and evidence to back such collated over the last year and more - hence the delay in response to the site.

Sheridan - who resides in Roscommon - was more than co-operative in assisting Heckman, Zimmerman et al by passing on documentation to them which was then maliciously misused in the attempt to discredit - documentation which he denies he holds and then refuses to return when so asked to do so.

This behaviour was endorsed and supported by the Presiding Bishop of the RCC, William Quinlan, who said he had no control over Sheridan despite being his superior!!

Now, for those who wish to know the truth - indeed the verifiable truth - can read this site, peruse it at your own leisure and acquaint yourselves with the facts.

If you wish to then make contact with me, please do feel free to so. I will be more than happy to clarify or otherwise for you.

May I take this opportunity to welcome you to this website.

You may have been directed here by searching for me on the internet, and it is for this reason that this site has been put together.

I would ask that you take your time in browsing this site and peruse the documentation provided which will establish facts as opposed to otherwise published in relation to me.

I sincerely look forward to hearing from you. In Him, Joseph August 2011
at 10:32 No comments:

Background To The 'Truth About Sotto Voce' Site

In February 2010, a blogspot entitled 'The Truth About Clerical Whispers' was published on the internet (by persons now known to me, whom are also in the clerical club) with the intention of defaming me in as public a way as possible and in the process causing great distress to those who know me; friends, family, couples I have had the honour and pleasure of working with, and for myself.


Until now, I have remained silent and this has been due to many varient reasons, but now, I can defend myself  using the same method used by those whose intentions were very much short of those of Christ.

On each paragraph you will find paperwork which vindicates my position, and although this is not something anyone should have to do, in this case it has been made necessary.


I sincerely hope this assuages any fears, answers any and every question and also confirms the oft quoted comment amongst those who know me better than a blogspot - 'there is no truth to 'The Truth'.

If you wish to privately engage with me in relation to what is on this site or otherwise, please feel free to do so by clicking the 'Contact Me' button on left of this page.


All statements made here are from an Affidavit which was prepared with the legal oversight of my own solicitor, and the Affidavit contains documentary evidence, most of which is also available for those who wish to acquaint themselves with the truth.
at 10:25 No comments:


Both these articles seem to wish to convey the idea that I have anything to do with their contents thereby yet again, as is the modus operandi and wish of the author(s) of this site to convey that I am a dishonest, distrustful and devious person.


This is totally false information and the presumption is clearly evident.


1.The providing of a link to another personal website which has now been removed (www.irelandsreformedcatholicchurch.blogspot.com) by the author(s) of this site certainly clarifies the intent and malice of those responsible for these blogspots which needs to be removed forthwith.


2. There is an implication made towards me in relation to paedophilia and I quote ‘we discovered in the church internationally, following checks and receipt of information, and not, thank God, as a result of an attack on a child, that we had two paedophiles in total to date in our clergy ranks in 11 years.


These were clergy who had joined us from other churches, and in fact, one was Irish. Both of them were laicised and expelled from the church.’


This gives the impression that I, as someone who left this organisation due to my concerns over a paedophile being in the ranks, was somehow implicated in this most heinous of activities and is defamatory.


3. Again, Niall Sheridan makes the same assumption that I am involved with Clerical Whispers which is most untrue and without foundation, and his claim that I am alleged to have said as much is totally without foundation and credibility.
at 00:47 No comments:


1. The totality of these postings can be responded to best by a letter from Bishop William Walsh, which he sent directly to me as a result of this article. (dated 7th July 2008 and addressed to me as Fr Joseph Ryan).

3, The Irish Catholic has in fact removed this article from its database due to it being false and misleading. 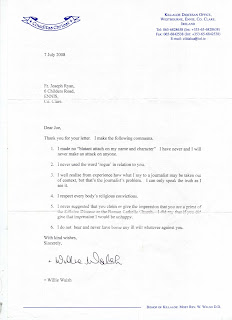 When the Seminary Castigates... (Contribution)

1. Please find attached a letter from the President of St Patrick's College, Thurles, County Tipperary, which addresses this article in totality. 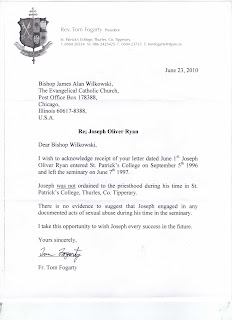 The Man Who's Not A Priest WANTED! 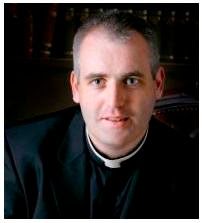 
At the time of the composing of this Affidavit, I state categorically that I have no affiliations with the Reformed Catholic Church (RCC).

I have not claimed to be a senior member of this aforementioned RCC.

The claim of dysfunctionality, discontent and disorder in the seminary are totally without foundation.

I have not sought to be ordained into many ‘schismatic sects’.

I do not operate a ‘lucrative’ service.

Ceremonies certainly do not cost between €500-€900 and there is no such thing either as ‘exclusive of extras’. Any and all ceremonies performed by myself take into account the personal financial circumstances of each couple and would not be of the sums as mentioned.

In relation to Bishop Emeritus of the Diocese of Killaloe, William Walsh, a letter from aforementioned bishop dated 7th July 2008 is addressed to myself as Fr Joseph Ryan.

I am a validly ordained Catholic priest, including within the norms of Canon Law, and this is evidenced by the attachments of correspondence from my old seminary, St Patricks College in Thurles, County Tipperary, and also the attached picture of a Papal Blessing sent to me from Rome in February 2014 for my work with the homeless and vulnerable in Ennis, County Clare.

No Communion is without valid blessing.

The availability of contact details for the alleged weeping bride leads one to question the validity of the claim, and such information was sought from the authors but never replied to.
at 01:08 No comments: